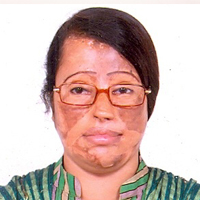 Ms. Nurun Nahar Begum is a gender expert with a professional career spanning eighteen years that includes immerse experience in the field of development. Following the completion of her Political Science Master’s from National University, her professional career began in 2000 as a counselor with COOPI Bangladesh, an organization funded by Italian Government. Following this, she joined ActionAid Bangladesh and continuing her work there till date. Over the last nearly fifteen years at AAB, Ms. Nahar has accomplished significant achievements and earned recognition within the wide ActionAid network that covers 49 countries.

For her work, Ms. Nahar was awarded Anna Top Ten Award in 2013 and the SOS Bangladesh Community Champion Award in June 2019.