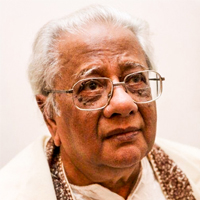 Kazi Fazlur Rahman is a retired bureaucrat and former Advisor in the First Caretaker Government of Bangladesh. He studied statistics at University of Dhaka and London School of Economics. He also studied Public Administration at Kennedy School of Government, Harvard University and Development Economics at Oxford University. He served as a lecturer in University of Dhaka before joining the Civil Service of Pakistan. He held many senior administrative positions under the government of Bangladesh and served in various international development agencies, including the World Bank and Asian Development Bank holding senior positions. He was awarded for his contributions in Education sector of Bangladesh by UNICEF and Turkish government. In his retired life he has distinguished himself as a columnist, writer, philanthropist and remains engaged with numerous national social care organizations and agencies. He is actively involved with Ahsania Mission, Founder Chairperson of Radda MCH-FP Centre and was the Founder Chairperson and is life member in Acid Survivors Foundation.