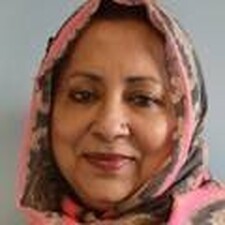 Dr Jahan moved to the UK in 2003 and joined Faith Regen Foundation, a multi-faith charity working to reduce social exclusion and committed to working towards increasing social harmony in the society. She was a member of Faith Regen Foundation’s staff since December 2003 and has previously held the positions of Director of Strategy, Head of Education and Head of Operations. She took over as CEO in 2013 and has been actively working to serve the marginalised community in the UK. FRF operate both nationally and internationally to build bridges with and between multi-faith communities, government and civil society to stimulate greater understanding and respect for cultural and religious diversity.

Having completed her doctorate degree in Statistics in 1994, Dr Jahan amassed over 22 years of extensive experience as an academic member in the Department of Statistics at Dhaka University. She served as Professor from 1998 to 2008. She has also worked as a consultant and principal investigator in various quantitative and qualitative social research projects focused on marginalised communities focusing on health and other regeneration activities funded by international organisations including WHO, Population Council, DFID, FHI, British Council, Open Society Foundations and Action Aid.

Dr Jahan has published a number of papers in national and international journals, with her findings being utilised to develop national-level policies. She has developed a training manual which was widely used in Northern Nigeria to train the Traditional Birth Attendants on Maternal Health and Child Care. She is also a co-author of “Ekhon Ami Boro Hocchi”, a training guide for adolescent educators to raise awareness on Reproductive Health amongst youth in Bangladesh.

As lead researcher in the Open Society Foundations’ Muslims in Europe’ project, Dr Jahan held responsibility for the City of London. The research constituted comparative analysis of data from 11 cities in seven European countries. It helped identify common trends and offered recommendations at the local, national, and international levels, including to the European Union and to international organisations.

Dr Jahan also led a team of researchers on a sensitive research project to explore experiences of domestic violence within BAME communities in the UK across eight boroughs of London, to identify attitudes, perceptions and awareness of support systems to tackle domestic abuse. More recently, Dr Jahan published “A Guide for Friday Sermons on Domestic Abuse” jointly with Shaykh Abdul Qayyum, Khateeb at the East London Mosque, as a guide to introduce this sensitive topic through Friday sermons in the UK and around the world.

Dr Nujhat Jahan is the co-founder and one of the Directors of Global Development Consortium UK. She sits on the advisory board of Faith Action a national network of faith-based and community organisations seeking to serve their communities through social action and by offering services such as health and social care, childcare, housing and welfare to work. She was previously a member of NIACE, the National Institute of Adult Continuing Education. Dr Jahan joined British Bangladeshi Ear Society (BBES) in 2014, and served as Chair from 2016-2020. In this role, she oversaw BBES sending numerous medical experts to Bangladesh, to treat patients and train experts in the field of treatment of ENT disease especially hearing loss and hearing management.

Dr Jahan is currently working to set up a model village in West Midland, to support vulnerable BAME victims of domestic abuse through the provision of a model village called Mum’s Nest (Mnest). The concept behind the Mnest model village is to open the opportunity to the vulnerable and destitute women experiencing social exclusion, poverty and VAWG who can seek solace and rebuild their lives in a self-contained community.