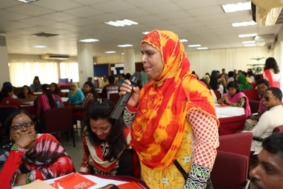 “I am not just a victim of acid attack, I am a woman as well. A man who disrespects a woman, can never be considered as a good human being,” said Suraiya Akhter Dolly from Mymensingh. She had a good family life comprising of six sisters, one brother and her parents. Her father was a farmer. Even after having to fend for such a big family, her father never neglected his children. His daughters were the apple of his eyes and he always referred to them as,” Ma”. Suraiya says,” While studying for long hours, we often used to fall asleep without eating anything. Our father then woke us up and fed us with his own hands.” Dolly used to study in a Madrasa (Islamic school). Often, in class or in the roads, quite a lot of people used to agitate her. Her new relatives also did the same. Dolly was annoyed by this sort of behavior and asked for her family’s help in order to solve this problem. Word spread quickly as a result of which, her agitators scared her more and even threatened to kidnap her. During this mayhem, Dolly was a student of class 8 in the Madrasa. At that time, a teacher’s relative who resided abroad, asked for her hand in marriage. Her father was anxious that at the current state, it was possible for anything to happen to his daughter at any time. Out of fear of losing self-respect, he agreed to marry off his daughter. Therefore, in 2005, at the tender age of fourteen, Dolly got married to Monir Uddin. All was well for a few months after her marriage. Nine months later, her husband Monir Uddin returned to Saudi Arabia and came back after three months. At that time, Dolly was pressurized by her husband to bring money from her father and was even told that all her wedding ornaments would be sold off. Dolly even managed to bring some money from her father. But, without taking her permission, her husband sold her wedding jewelry. Later, it was discovered that Monir Uddin has become a drug addict. Her in-laws never raised their voices to protest against the torture that Dolly was being put through. In 2008, with her family’s permission, Dolly divorced Monir Uddin. After the divorce, Monir Uddin regularly threatened her and even told her that he would burn her into complete ashes. On the 1st of September, 2008, which was also Ramadan eve, Monir Uddin threw acid at her face. Dolly was severely affected by this. Water was used to subside her pain and she was taken to the hospital. She was taken to Dhaka Medical College Hospital from Mymensingh Medical College on that very night. She stayed in the hospital for a long time and with the help of her family, she soon regained her health. Her father’s savings were used up in order to pay for her treatment. Later, she came to Acid Survivors Foundation for further checkup. She lost one of her eyes and an ear due to acid violence. Her face, hands, throat and chest were burnt. However, this did not stop her. She said, “I am not a defeated soldier. I need to live a life worth living. I should learn to put aside my moments of frustration and shock in order to learn to dream again. I shall pray for that monster’s punishment and for justice to be served.” on the 9th of September, 2008, Dolly filed a case against Monir Uddin in the Gaforgaon police station. When adequate information was collected, the police took her statement. Dolly said, “I repeatedly received threats to withdraw the case. However, I simply said that the person who commits a crime and a person who tolerates that injustice, are both to be blamed and should be punished equally.” She also said that,” My father was disheartened to see me in such a miserable condition. He often cried by saying that he himself was responsible for ruining my life. This sorrow brought him to his death in 2010.” He was actively involved in Dolly’s case and ensured that every witness involved was brought to court. Dolly also said that the judge was a sensitive person. In 2011, the culprit was granted life sentence and his bail was set at one lakh taka. Three months after the court’s ruling, the accused was caught and has been held in captivity since then. However, Dolly is yet to receive her money. She hopes for the complete implementation of this case in the hopes that corrupted minds can be corrected so that no one has to suffer fromacid attacks. After the court’s decision, Dolly has started her life with new dreams. She was admitted in class 9 and successfully passed her SSC board exams. Alongside that, she works as an ambassador for acid survivors and uses her experience to rearrange the lives of similar victims by encouraging them. By working jointly with the Collective Development Union, she has fulfilled her job of being an ambassador. She is connecting with her brothers and sisters who have suffered from acid violence. By means of group and community meetings, she is trying to ensure that the survivors go back to living their old lives and is also trying to create a positive mindset in the society about victims of acid attack. She is trying to help in everyone’s development and well-being. She serves as an advocate regarding public and private sector support and by ensuring the government’s help. Dolly said that, “Every month, we survivors arrange a meeting where we share our sorrows. We can talk freely here and plan for a better life ahead.” She also added, “We will earn our rights, become self-supporting and will be able to stand for ourselves by becoming self-independent. By keeping this vision in mind, we have formed a group of survivors. We hope and aspire to live as fulfilled human beings who are not neglected or looked down at by anyone.”