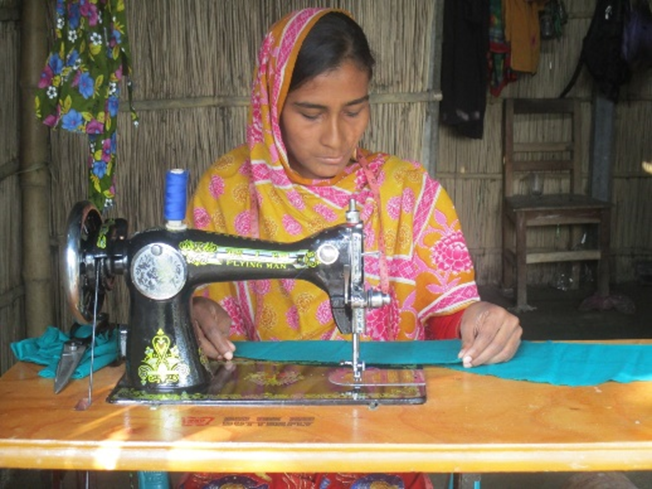 Kolpona Akter lives in Jalalpur village near Pabna headquarter. She lost the opportunity to have the affection of a father as her father left them right after her birth by marrying another woman. They could have had their own property i.e. cultivable land and homestead if her father wouldn’t sell those for his second marriage. Her father started a new conjugal life leaving Kolpona and her mother in a crisis, depriving them from everything. Traditionally her family has been involved in weaving and they used automated handloom for weaving. Kolpona dropped out of school after class five and had to join her mother in the weaving activities at home. 12 years old Kolpona was married off to one of her relatives, Shahidul, who also was a power-loom operator as well as a shopkeeper. Kolpona’s mothers took a loan of 26 thousand taka from a local NGO and provide 15 thousand taka to meet the dowry. Kolpona’s mother added another five thousand taka to his son in law that entire she wanted was a better life of Kolpona in their new conjugal life. Soon after the marriage Kolpona realized that Shahidul is an impotent. Still she agreed to go ahead with him. After 15 days of their marriage Kolpona wanted to visit her mother and Shahidul asked her to go alone and he would join later. But neither had he come to visit them nor he was intended to take her back to his home unless a big amount of money as a dowry is given to him. Kolpona tried several times to talk to him and his family. She, therefore, took the help of local leaders to negotiate. And she returned to her husband’s home. But, since then Shahidul started torturing Kolpona for an amount of two hundred thousand taka. Kolpona said straightway it is never possible for them. The physical and mental torture on Kolpona kept on and got harder day by day. Shahidul got furious on her gradually and one day, 25 December 2009, he attacked her with acid. His plan was to kill her by pouring acid into her mouth. She was admitted into ASF hospital with the assistance of Local BRAC office after 3 days of the attack. After a prolonged treatment more than two months from Acid Survivors Foundation Hospital she returned to her village and started living with her mother. During the treatment she get surgeries, received individual counseling, family counseling, group counseling, art therapy and music therapy from ASF. ASF provided income generating support to her with a sewing machine and 30 thousand taka. She also received a loan from the social welfare office. She is a hard worker and is committed to do productive work. She is no more a depended woman; rather she contributes to the family. Beside their traditional power-loom activities she opens a tailoring shop inside their home and earns a decent living. For her courageous surviving attitude and the entrepreneurship, she achieved the Joyeeta Award at divisional level provided by the Ministry of Women and Child Affairs.